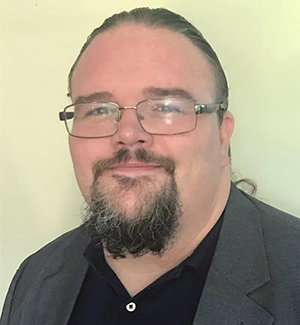 Clarence "Andy" Taylor has more than 25 years of experience in the video game and information technology industries. After recieving his GED from Kilgore College at age 17, he began his professional career as a Tier 2 support technician for America Online. At 18 years of age, he became a coordinator of the Mizner Teen Center at the Boy's and Girl's Club of Rusk County as an Americorp VISTA Volunteer. There he began to run gaming tournaments on consoles and PC's provided by a technology grant from Yahoo!. After his Americorps service he went into business for himself, providing private IT support for many different companies and small businesses. In 2014 he opened a gaming store in Kilgore called "Geek Eazy," providing a hub for technology and gaming of all types to the local community. Taylor began coordinating with local comic book store owner, Ricky Custer, to develop an annual festival celebrating gaming culture called "Geekend," running for three days every May since 2015. In the fall of 2018, Taylor began to pursue a degree in Business Management at KC while simultaneously earning a certificate in Esports Business from Warner Pacific University. In the summer of 2019, he began building the framework for the Esports program at KC with the support of KC President, Dr. Brenda Kays, Dean of Business Richard Crutcher, IT Department Chair Dr. Ginger Dennis and Instructors Julian Redfearn and Mark Stephens. Taylor is a lifelong resident of Kilgore. He and his wife of 10 years have a 7 year-old son named Oliver. They enjoy volunteering and community service projects. Taylor has served as the vice president for House of Hope shelter for women and children since 2007.