Where have Coach Hoberecht's players played?

Lonnie McClanahan
The University of Texas at Arlington

Chinedu Amajoyi
The University of Louisiana at Monroe

Other Division I Players:

KC Players that have signed with four-year schools:

Former KC players in the NBA: Marcus Thornton played at Kilgore College from 2005-07 under head coach Scott Schumacher where he earned All-American honors. He currently plays for the Houston Rockets. He was the leading scorer at Louisiana State University in 2009 (averaging 20 points per game) and was drafted in the 2009 NBA Draft as the 43rd pick by the Miami Heat. He was then traded to the New Orleans Hornets where he was named All-Rookie Second team in his first year in the NBA. He also set a Hornets franchise record for most points scored in a quarter with 23 points. In 2012, he signed a five-year, $40 million deal with the Sacramento Kings and was traded to the Nets in 2014 in exchange for Jason Terry and Reggie Evans. After playing for the Nets during the 2013-14 season (averaging 12.3 PPG) he was traded back to Sacramento for the 2013-14 season, then played at Boston and Phoenix during the 2014-15 season before being traded to Houston. More Info Francisco Elson played at Kilgore College from 1995-97. Elson played eight seasons in the NBA with Denver, San Antonio, Seattle, Milwaukee, Philidelphia and Utah. He was drafted by the Denver Nuggets in the 2nd round of the NBA draft in 1999. He was a member of the San Antonio Spurs in 2007 when they won the NBA Championship. More Info Former Kilgore College standout Steve Bracey was drafted in the 1972 NBA Draft by the Atlanta Hawks. He played in the NBA from 1972-75 for the Atlanta Hawks and the Golden State Warriors. Bracey was a 6'1" guard that played at KC, then at the University of Tulsa. He averaged 6.1 points per game for his career and won a NBA Championship with Golden State in 1975. More Info 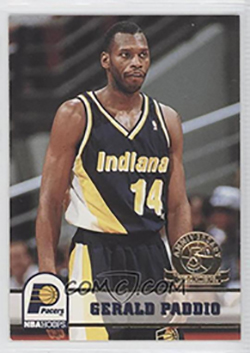 Gerald Paddio played in three National Basketball Association (NBA) seasons for five teams – the Cleveland Cavaliers, Seattle SuperSonics, Indiana Pacers, New York Knicks and Washington Bullets. A 6'7" small forward from Kilgore College (1984-85) and the University of Nevada, Las Vegas (UNLV), Paddio was selected by the Boston Celtics in the third round (74th overall) of the 1988 NBA draft. In his NBA career, Paddio appeared in 129 games and scored a total of 715 points. More info