At the 2 p.m. ceremony, Associate of Applied Science (AAS) degrees and Certificates of Completion (CERT) were awarded. 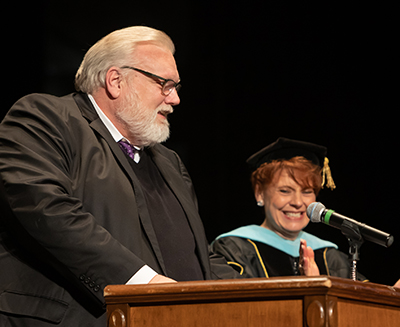 Steve Beasley, General Manager of Patterson Motors of Kilgore, has worked for 36 years in the automobile business.  He was instrumental in Patterson’s major sponsorship of the Cruise for Success program at KC, which will award one lucky student (in the spring of 2020) a brand new car.  Steve said his ultimate goal is to continue to instill his core values and strong faith into the next generation, where he can use his 36 years of experience to train and develop other young, ambitious people and lead them to the same successful careers that he has enjoyed in the greatest industry in the world – the automotive industry.  Other than Steve’s wife, Tammy, of 20 years, his five children, and nine grandchildren, his success in the automobile business is the greatest accomplishment of his life.

About the award: The Blue Ribbon of Excellence for Student Success is an award presented by the college to celebrate and honor the partnerships formed between the institution and community members or businesses dedicated to the furtherance of KC's mission. Taking from pride in our school colors, the blue ribbon and the silver medallion symbolize the important ties within our community and the generous contributions our partners provide to ensure a legacy of student success. 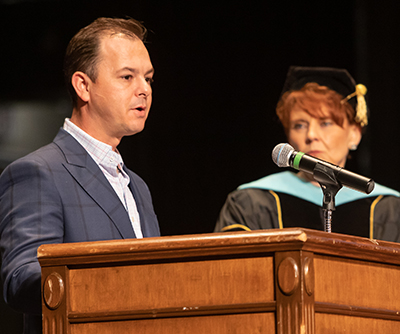 Steve Torrence, 35, is a 2001 graduate of Kilgore High School and a graduate of KC.  In 2018, Torrence won the NHRA drag circuit’s Top Fuel Division title in his Capco Contractors Top Fuel dragster, and became the first driver ever to win both the Alcohol and Top Fuel championships.  He was also the first NHRA driver ever to win all six races in the league’s countdown to the championship. Last season, he won 11 races and has won 19 the last two years.  Torrence, who lives in Kilgore, is also the first driver to win all six races (a total of 24 two-car heats) in the NHRA playoffs.  He was also recognized on the floor of the state House of Representatives March 20 for his accomplishments in professional drag racing, specifically for winning the 2018 NHRA Mello Yello Top Fuel Championship.

About the award: The Blue Ribbon Medal of Excellence for Alumni Success is an award presented by the college to celebrate and honor the accomplishments and successes of our distinguished alumni. Taking from pride in our school colors, the blue ribbon and the silver medallion symbolize the enduring ties between the college and our students and recognizes the important contributions our alumni make within their chosen fields and communities.

PHOTOS ABOVE BY Jamie Maldonado/KC