Lady Rangers get first win with defeat of Collin College, 54-52

KILGORE, TX -- After losing their first three games by a combined total of eight points, the Lady Rangers were finally on the right side of the scoreboard with a win against Collin College, 54-52, in the final non-conference game before opening up Region XIV action.

The tables were turned Jan. 25 as the Lady Rangers lost to Collin College, 56-53, in Plano.

Collin College scrapped its way back into the contest after trailing by as many 14 points in the second half.

With nine seconds left and KC ahead by two points, Rahmena Henderson blocked a Collin shot and Mckenze Brown grabbed the rebound at the buzzer to preserve the KC victory.

The Lady Rangers were led in scoring by Jada Hood with 13 points and Josephine Adegbite with 10.

KC improves to 1-3 on the season and will open up conference play 5:30 p.m. Wednesday, Feb. 3, at home versus Panola College. 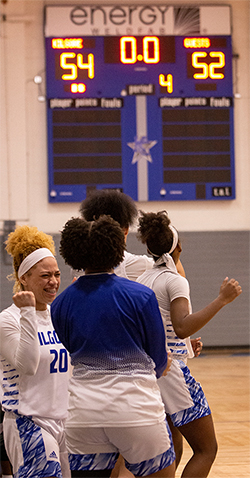 Photos above by: Catie Denfeld/KC Marketing