Kilgore College rolled out its new model of eight week classes this week, breaking the mold of typical 16-week semesters – and students enrolled at KC are raving about the new model and how it has changed the way they go to college.

KC is the first college in East Texas to implement eight-week terms, a revolutionary new method of instruction proven to increase student success.

Rather than one long 16-week fall and spring semester, most courses at KC are now divided into two eight-week terms with a short break in between.

“Being a first-time college student, I was a little nervous about the workload of classes and how I could manage having a part-time job while maintaining my studies,” said Jackson Mauldin, freshman from Kilgore.

Maludin's job has him on the road quite a bit, touring the country playing bass in the Chris Colston Band.

“Once I learned that I could take two or three classes per eight-week term and still end up with 12 or 15 hours per semester, that reduced my stress by realizing I could commit myself to a fewer number of classes while maintaining my band’s commitments,” Mauldin said.

The concept is not a new one, with colleges such as Odessa College and Amarillo College finding great success with the new scheduling model.

Studies show that full-time students who take just two or three classes at a time are better able to maintain focus and excel in the classroom.

“It has been a good first week and has been less stressful than I thought it would be,” Mauldin said. “It’s nice to focus on two classes at a time rather than four or five classes at the same time.”

This scheduling method also gives part-time students the opportunity to attend KC on a full-time basis.

A student who is able to take only two classes at a time could do so twice in a single semester - by taking two eight-week classes during the first half of the traditional 16-week semester - then taking two more during the semester's second half.

“Completing four classes (a total of 12 semester credit hours) in a single semester – two classes at a time – will classify a student as a full-timer and could potentially cut the time they spend in pursuit of a certificate or degree in half,” said Dr. Brenda Kays, KC president.

Those who are already full-time students at KC, or students who plan to be, can also expect to benefit from the new class configuration.

Studies show that in addition to less burnout, students typically avoid feeling overwhelmed with fewer courses to take at the same time, avoid juggling multiple assignments and deadlines and the model fits well with all students whether they are overachievers, working students or students who tend to struggle academically.

Qualifying KC students are also automatically enrolled in the “Cruise for Success” drawing that will take place in the spring of 2019 for a brand new Chevrolet Cruze, courtesy of Patterson Chevrolet Kilgore.

“It’s exciting to have the possibility to win a new car,” Mauldin said. “It’s definitely an incentive to stay in school to get a chance to win a new ride.” 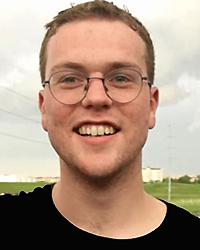