Built in in 1967, the library underwent a $2 million redesign and renovation over the last year with Transet Co. serving as project manager.

Designed to transform the role and function of the traditional library, the bottom floor of the Watson Library now has computer pods, lounge areas with new furniture and a coffee shop.

Maximum guaranteed prices for the library project and renovations of the Lee Mall area were unanimously approved by the KC Board of Trustees at their July meeting in 2015.

The board also approved roughly $1 million to construct a park area in the central portion of campus where the Martha Pfaff Ivan Liberal Arts Building was located prior to demolition in 2014.

Miller, originally from Henderson, attended KC where he began a long and distinguished relationship with the college and the Rangerette organization.

More information about Mike Miller and the Lee Mall:

Lee Mall and the Mike Miller Plaza are located centrally on the Kilgore campus, designed as a common area for students to relax and as a central location for college events.  The location is the former home of the Ivan Liberal Arts Building which was demolished in 2014.  Lee Mall encompasses the walkways that lead from east to west on campus.

Miller, originally from Henderson, attended KC after high school which began a long and distinguished relationship with the college.  Miller earned a Bachelor of Business Administration and a Master of Business Administration from Southern Methodist University and went on to serve as Senior Vice President of the National Spirit Group, Ltd., the group that became the parent company of the National Cheerleaders Association, Cheerleader Supply and NCA Superstar Dance Program camps. He was responsible for the dance, drill team and pom pom programs of the company which he originally helped develop in 1975. He started NCA Superstar with 10 camps and 887 summer camp participants. Under his direction, the NCA Superstar Dance Program was the largest in the United States with more than 30,000 students participating in camps throughout 27 states. In January of 1993, Mike left the National Spirit Group to start his own company, Mike Miller & Associates Special Events. The company continues today to place cheerleaders and dancers in football bowl game halftime shows and parades. In addition, his company nationally coordinates and produces events not related to the spirit industry. Both Southern Methodist University and Kilgore College have were his benefactors. He has endowed more than 18 scholarships alone to Kilgore College, 12 of which directly benefit and impact the Kilgore College Rangerette organization.

The Lee Mall was named after Davis Russell “Rusty” Lee who worked in maintenance at KC for 47 years where he served under the first six presidents at Kilgore College. The mall area located in the central part of campus was named in his honor on Aug. 31, 1989.  Lee was first employed at KC in 1942 in maintenance.  From 1943-46 he served in the U.S. Army during World War II in the Philippines and Japan.  In 1946 he resumed his work at KC as supervisor of maintenance where he was responsible for firing the boilers, handling the mail, mowing the lawns, trimming the hedges, maintaining the flower beds and planting the shrubs and trees on campus.  He planted almost all of the now old trees at KC, most of which were transplanted as young saplings from the surrounding Kilgore area.  He also taught horticulture classes at KC, primarily in the establishment and maintenance of the school's trees and shrubbery. 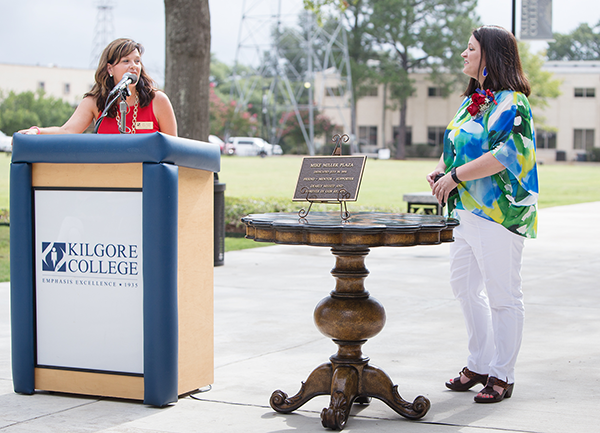 Above: Leah Gorman, KC's director of development, and Lisa Fortenberry unveil the Mike Miller Plaza plaque that will be displayed on campus.

Above photos by Jamie Maldonado/KC

View more photos from the event