Moreno, a KC softball player from Humble, was one of 10 students who qualified as the top point-earners for a chance to win the car at the prize giveaway.

With the 10 students seated on the front row, names were drawn one at time with the first eight students drawn winning $500.  With two students left, two car fobs were drawn from the hat with only one that operated the new car.

Moreno possessed the winning car fob and the keys to her new car.  Michael Elliot, of Haltom City, took away the runner-up prize of $1,000.

The Cruise for Success program allows qualifying KC students to earn points throughout the fall and spring semesters for a chance to win a new car, sponsored by Patterson Chevrolet Kilgore.

KC graduate and NHRA top fuel dragster Steve Torrence, who serves as the official spokesperson for Cruise for Success, spoke at the event, along with Steve Beasley, General Manager of Patterson Chevrolet in Kilgore.

“We are so thankful for Patterson Chevrolet of Kilgore and all of our other wonderful sponsors for their commitment to this program and the success of our students,” said Dr. Brenda Kays, KC President. “None of this would have been possible without our partnership with Patterson Chevrolet in Kilgore – a true community partner dedicated to the success of our students.”

About Cruise for Success:

The Cruise for Success incentive program is KC’s way of encouraging student success by giving students an opportunity to win prizes as a reward for doing things proven to increase overall success in college.  KC holds monthly prize drawings for students earning points, culminating in the grand prize giveaway of a new car in the spring.  In addition to Patterson Chevrolet in Kilgore, other sponsors include Capco Contractors; Torrence Racing; Marco Inspection; and AMBUCS of East Texas.

For the second year of the Cruise for Success program, the grand prize will be a new Chevrolet Trax, thanks to Patterson Chevrolet in Kilgore.  Qualifying KC students can begin earning points in August for monthly prizes and a chance to win the new Chevy Trax in the spring of 2021. For more information, visit www.kilgore.edu/cruiseforsuccess.

Photos from the 2020 Cruise for Success Car Giveaway: 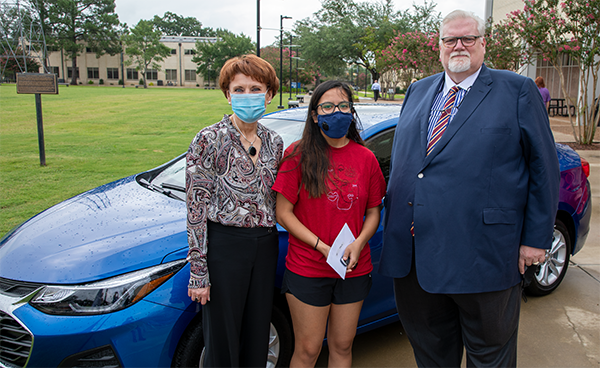